History of the Town of Sampson

The township of Sampson was formed in 1889. Until 1889, Bloomer Township encompassed the area known today as Sampson Township. The Town of Sampson is named after Admiral William T. Sampson, hero of the Spanish-American War. 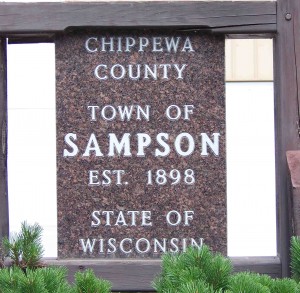 the present-day hall is. Pine Grove school served as the town hall until 1992, when the current building was built.

In 1876, Tillinghast opened a bank in Vanville (later changed to Bloomer). In the northern corner of the township is an area known as “Twin Lakes.” This small community contained a school, cemetery, dance pavilion, a post office, and a store named the Paulson Store.

One other area was known as Lakeville. That area was also known for its stopping place along the Chippewa Trail for loggers and travelers heading north. The last area is east of Highway 40 and is known as Mudbrook. The area was primarily owned by lumber companies and was not highly settled. This is probably the reason for no post office, even though the area is quite large.

For more information on the history of Sampson Township, see NESTLED AMONG THE LAKES AND PINES by Tina Susedik.